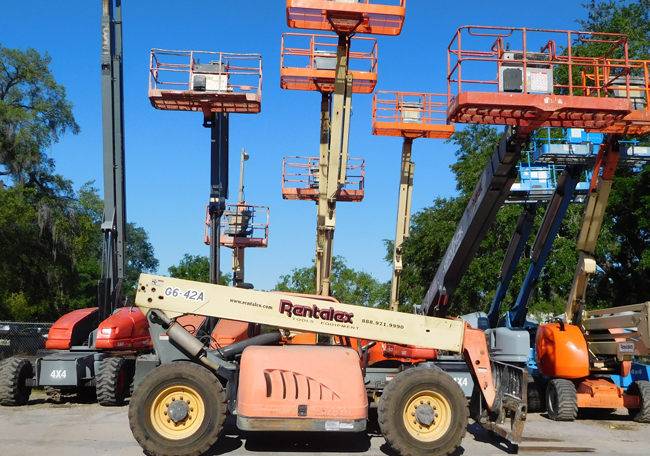 Aerial work platforms have the potential to improve both company and profitability. Aerial work platforms include telescopic and articulating boom lifts, and either kind is commonly referred to as a cherry picker, man lift, or AWP. Many individuals wonder what type of boom lift will best suit and enhance their business. Access Lift Equipment is happy to provide you with information and answers to assist you to choose the best machine for your needs.

Boom lifts, whether rented or owned, are intended to securely and effectively carry products and humans up to working heights of many floors. Stonemasons, for example, may choose to abandon ladders and scaffolding in order to work on towering constructions more safely. Contractors of various types may consider purchasing a telescopic or articulating boom lift for the first time, or upgrading and maintaining an existing fleet.

Among the several varieties of boom lifts, an articulating or telescoping boom is frequently the safest option while also increasing capacity and speeding up production. Most owners, managers, and employees desire what is safest and most efficient for everyone. Boom lifts have an advantage over ladders and scaffolding since they are far safer when used appropriately, as well as more efficient and often faster.

An articulating boom gets its name from one of the meanings of “articulate” – a succession of pieces joined together by joints. This type of boom is also known as an up-and-over or knuckle boom. The nicknames are derived from the motion of the booms as they work. Companies with busy, congested work sites frequently pick an articulating boom because it not only reaches high and far, but it also masters angles and reaches to operate around people and equipment. As a result, it is a better alternative for constrained places, such as an apartment construction project in a densely populated location.

There are also zero tail swing articulating boom variants available. In other words, as you spin the chassis, nothing sticks out more behind you than the chassis. Articulating booms extend outward, above, and over. A jib attachment, which adds a portion to the end for another articulation point, can also be used to add an extra knuckle. An articulating boom lift may reach across regions such as construction floors or warehouse shelves. Some versions may additionally reach to a particular depth, such as a lower level or into a gravel quarry, utility pit, or other dug area.

Models with non-marking tires that run on DC electric power or clean-burning gasoline are suited for interior usage in warehouses, manufacturing, and retail. There are rough-terrain variants with four-wheel drive, diesel engines, lug-tread tires, and oscillating axles designed specifically for outdoor contractors. There are several advantages to using an articulating boom lift. It can move up, down, and side to side. It can fit into small spaces, obtain tough positioning, and, depending on the model, handle interior or outdoor terrain. In addition to extending the length and reach, it can also be extended with extended joints.

Because it resembles a long, straight stick when extended, a telescopic boom is also known as a straight-mast boom lift or a stick boom. Because the base resembles a forklift but the extension section resembles a crane pole, the telescopic boom is frequently regarded as a hybrid between a crane and a forklift. Aside from the boom lift, certain variants can handle various accessories. Because the components of a telescopic boom lift are powered by hydraulics as they stretch and retract, this form of the lift provides excellent stability and strength. Height is added as the lift expands. Some have permanent cabs, while others rotate.

A telescopic boom’s horizontal reach makes it the greatest choice when a distance must be safely spanned to access the task. There might be a tiny body of water, a large foundation hole, or other obstacles between you and the project location. Telescoping booms excel in outdoor and unimproved work environments because of their all-terrain tires, four-wheel-drive gearbox, and oscillating axle. Along with the telescopic boom’s strength and height comes the requirement for lots of space in which to operate. It requires at least complete overhead clearance and enough of space to make rotations and other motions. The telescopic boom has various advantages since it works well over long distances, it handles uneven terrain well, it can do many duties, it boosts production rate, and it makes high reaches easier for specific industries.