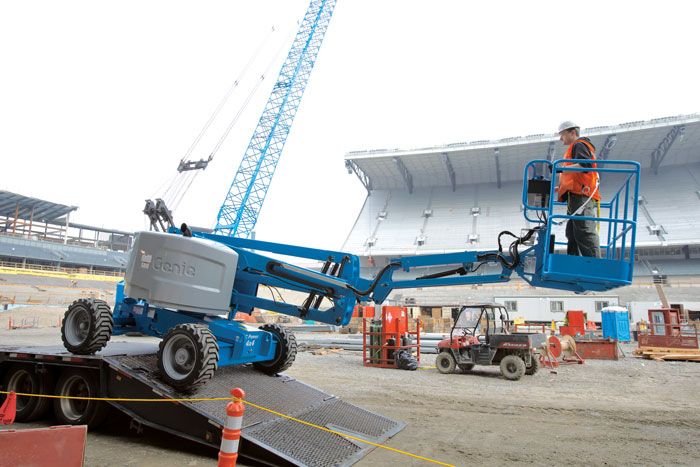 Workers, their tools, and supplies are transported off the ground by boom lifts. Boom lifts can be classified into two categories. The telescopic boom lift, also known as the straight boom lift or stick boom, has a single arm that can reach a long distance. A wide open area is the best place to use them, and they are stable enough to handle a variety of terrains. The articulating boom lift, also known as a knuckle lift, is another type of boom lift. The segmented arms of this lift enable it to fit around obstacles and work in tight spaces. As a result, they can work on more complex structures and in crowded areas, such as downtown.

The power source of boom lifts can be diesel, gas, electric, or even hybrid. All terrains can be handled by two- or four-wheel drive vehicles. Additionally, they can be equipped with different types of tires or treads based on the conditions. A variety of sizes are available, starting from 30-footers that can fit through doorways. If you need to reach 19 stories, you can use a 180-foot boom lift. It is possible to use boom lifts for a wide range of purposes, and there are several distinct makes and models to choose from.

It is critical to ask as many questions as possible while evaluating the various types of boom lifts and determining which is best for your needs. Is the worksite indoors or outside? Is the land level or slanted? How easy is it to get to the jobsite? Will workers work directly in front of you, beneath you, or above you? Consider mobility as well: will operators need to move horizontally or vertically, or will they just go up and down?

Work needs should also be considered while deciding which sort of boom lift is best for the job. Consider how many workers will need to be on the platform and what tools they will require to fulfill their tasks. This also has an impact on weight concerns. Consider how much weight the lift will need to transport as well as the task site’s limits. Only until you’ve addressed each of these considerations can you genuinely begin to choose the best lift for the task.